When you’re the biggest star in the world, you need a car to reflect that. Over the years, celebrities have helped inform trends, lending their names to some classic brands and helping to further the success of others.
If you’ve ever wondered which classic cars were driven by the world’s biggest stars, then wonder no more; this month we’re going to talk you through some of the vehicles which were popular with the stars.

What car did Elvis drive?

The King himself was apparently rather fond of Cadillacs, having a collection of them which included the 1955 Cadillac Fleetwood 60 in hot pink (his favourite, apparently) and 1956 Cadillac Eldorado.

While it’s the Cadillacs he’s most associated with, he also had a number of other motors, including a 1957 BMW 507, a 1975 Ferrari Dino 308 GT 4 and a 1971 De Tomaso Pantera – the latter of which he shot at in anger. From the sporty to the ornately luxurious, this was a man who truly loved cars.

What car did Marilyn Monroe drive?

To this day, people still know who Marilyn Monroe was. Her look was so iconic that she left a lasting impression on the world. But what did she drive? It appears that, like Elvis, she drove a number of classic cars over the years, but most popular among her rides appears to be the Cadillac Eldorado.

Due to a string of short-lived marriages, there are many pictures out there of Marilyn Monroe in different classics. Thunderbirds, Chryslers and even a Lincoln Capri make appearances, but it’s hard to know which cars she owned, which belonged to her husbands and which were purely for photoshoots.

What car did Elizabeth Taylor drive?

Another icon from the golden age of Hollywood, Liz Taylor had many more marriages than Monroe, and therefore is similarly hard to pin down in terms of classic cars. A gift from one of her husbands, a gold 1962 Maserati 3500 GT is thought to have been one of her favourite cars.

A 1964 Rolls-Royce is thought to have been used in her wedding to Richard Burton, while the movie Butterfield 8 saw Taylor driving a Sunbeam Alpine Series I.

What car did Freddie Mercury drive?

Despite not having a driver’s licence, the world’s greatest frontman didn’t skimp on the luxury when it came to his vehicle of choice. His 1974 Rolls-Royce Silver Shadow was kept in his family long after his death, making appearances for the We Will Rock You musical, before eventually being sold at auction to a Russian individual in 2013.

It is rumoured the car was kept in the exact same condition as when Mercury last used it, with a leather interior and an unused box of tissues.

What car did Audrey Hepburn drive?

Despite appearing in numerous films with some truly stunning classic cars (and being photographed with a Ferrari), it seems hard to pin Audrey Hepburn down to one car. What she drove personally is still debated to this day, with many thinking that a black and red Mercedes-Benz was her car of choice. She apparently stopped driving after a minor incident spooked her.

What car did Michael Jackson drive?

With so much money at his disposal following is rise to fame, it’s little wonder that Michael Jackson acquired a weird and wonderful variety of vehicles. From a converted fire truck and police bike to a 1954 Cadillac Fleetwood (just like Elvis!), he was a keen collector.

Rumoured to have been his favourite, the Mercedes 500 SEL is what he used out in L.A. for commuting to the studio. Even when he stopped driving later in life, he still kept the 1985 model.

What car did Whitney Houston drive?

Not only was Whitney Houston a hit with her soul music, but she was also a movie star. With that comes the need for vehicles to match your status, to which Houston obliged. The stand-out vehicle from her collection was the 1986 Rolls Royce Spur limo, offering all manner of luxury features.

Other cars she’s rumoured to have owned include a white Porsche 911 and a yellow Ford GT. While it’s hard to prove quite whether she owned these cars, it would hardly be surprising.

What car did John Lennon drive?

John Lennon’s last ever vehicle purchased was a rather homely looking 1979 Mercedes-Benz 300TD Estate Wagon, which he had shipped back to England. More striking for his garage, however, was the Rolls-Royce Phantom V which he had repainted with a psychedelic, bright yellow theme befitting of The Beatles.

This subversion of such a stately vehicle drew criticism from some, according to Lennon, who said one woman attacked it with an umbrella.

What car did James Dean drive?

Of everyone in our list, no one had as big an interest in cars as James Dean, who took up racing as a hobby. It was while driving out to a race in a Porsche 550 Spyder that he slammed into another car and died almost instantly.

Prior to that, Dean was known to have driven a 1953 MG-TD and a Porsche Super 1500. These flashy cars earned him a reputation akin to that of his onscreen persona – driving for the thrill of it.

What car did Bruce Lee drive?

Arguably the master of martial arts, but apparently not the best driver, Bruce Lee still had pretty good taste in cars. Despite often needing friends to drive him, he owned a red 1972 Mercedes-Benz 350 SL.
In the television show The Green Hornet, in which he starred as Van Williams’ sidekick, he was regularly aided by a customised 1966 Imperial Crown sedan called ‘The Black Beauty’. 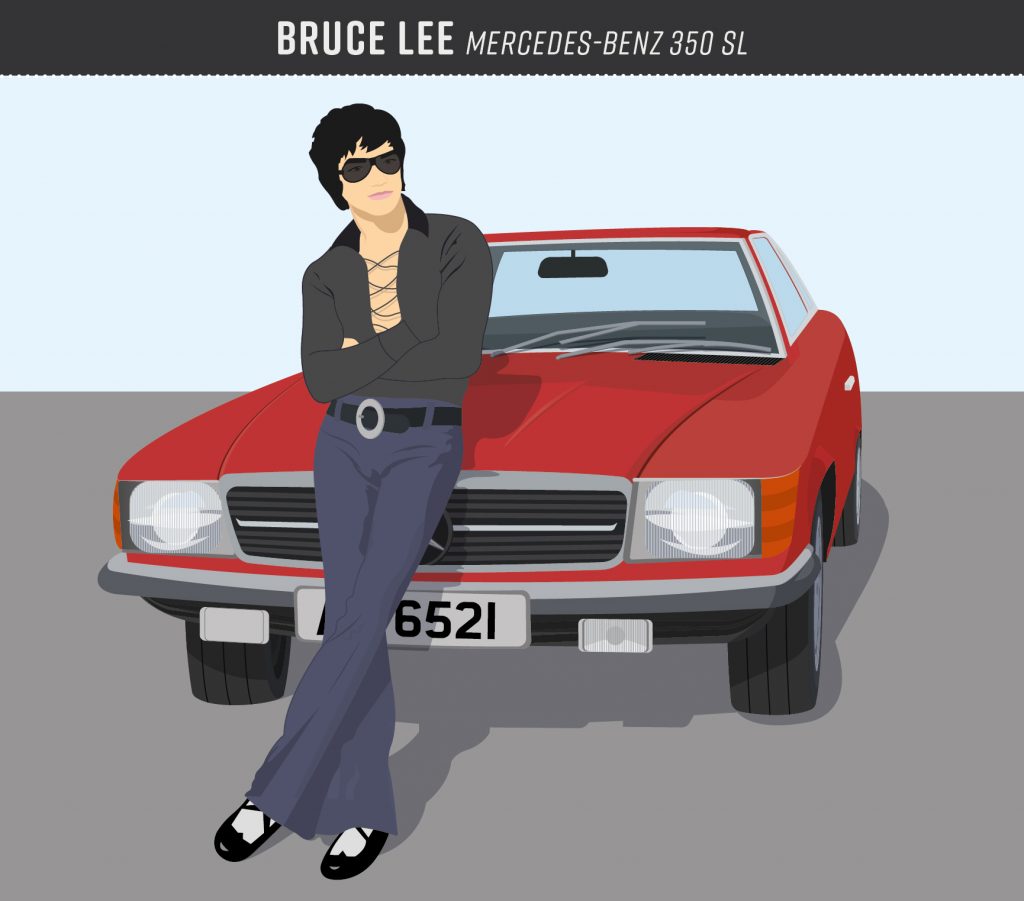 It’s always hard to know for certain that a car is genuine when it appears at auction with claims that it was owned by someone famous. Certainly, there are cars which have a greatly increased value when ownership can be proven beyond a shadow of a doubt.
If you’re a classic car owner and you’re looking to keep it in prime condition, look no further than Classic Car Windscreens. We source and fit glass suitable for any make or model of vintage car, ensuring the genuine status of your prized motor.