It’s always an interesting phase for the genre-defining franchise when a new actor is needed to fill the shoes of British spy James Bond. Daniel Craig will be playing 007 for one more film, but it’s anyone’s guess who will take over the martini and gadgets after that.

One constant of the franchise you can rely on though, is the stylish cars. Since Dr. No in 1962, featuring Sean Connery as Bond, there have been a number of cars associated with the franchise. Let’s take a look back at some of the classic cars and the gadgets which helped save the day.

Synonymous with the franchise, the Aston Martin DB5 is almost as famous as the James Bond character himself. Epitomising the style, speed and class of the films, it’s appeared in numerous Bond movies – and can be spotted in the background of several others – but Sean Connery was first to get his hands on the gadget-laden vehicle.

Highlight: Pursued and captured by Goldfinger’s men in the 1964 classic, Bond utilises the ejector seat to propel his captor – who has a gun trained on him – out of the Aston Martin with a flick of the button in the gear stick.

It might be the Aston Martin which sticks with people, but no one can forget the Lotus Esprit. White, angular and able to go on underwater adventures, it’s the ultimate gadget. This classic car was actually made as a submarine to be operated by stunt divers, going from a car chase on land to an aquatic pursuit in the blink of an eye.

Who was Bond? Roger Moore

Highlight: Bond’s female agent counterpart knows her way around the Esprit, launching an oil slick and dropping a mine while underwater to take out their aquatic pursuers.

Slipping and sliding its way into the hearts of Bond fans, the Mercury Cougar was actually driven by the only woman to officially become Mrs Bond – Tracy di Vincenzo. Deftly driven through the Swiss Alps, she evades the bad guys and wins 007’s heart with this lean, clean convertible.

Appeared in: On Her Majesty’s Secret Service (1969)

Who was Bond? George Lazenby

Highlight: While trying to shake off their attackers, Bond hops into the Cougar XR-7 with Tracy at the wheel, but they gatecrash some sort of downhill rally competition, clattering multiple Minis.

Another classic car from the Bond franchise which wasn’t owned by the titular character. The 2000GT, specially made for the film, was actually owned by S.I.S agent, Aki. Made a convertible – or at least, to look like one – so that it could fit Sean Connery’s considerable frame, it was a curvaceous little Tokyo runaround.

Who was Bond? Sean Connery

Highlight: Not able to outrun their pursuers, Aki calls in help to have a helicopter with a giant magnet lift the enemy off the road and drop them in the ocean. 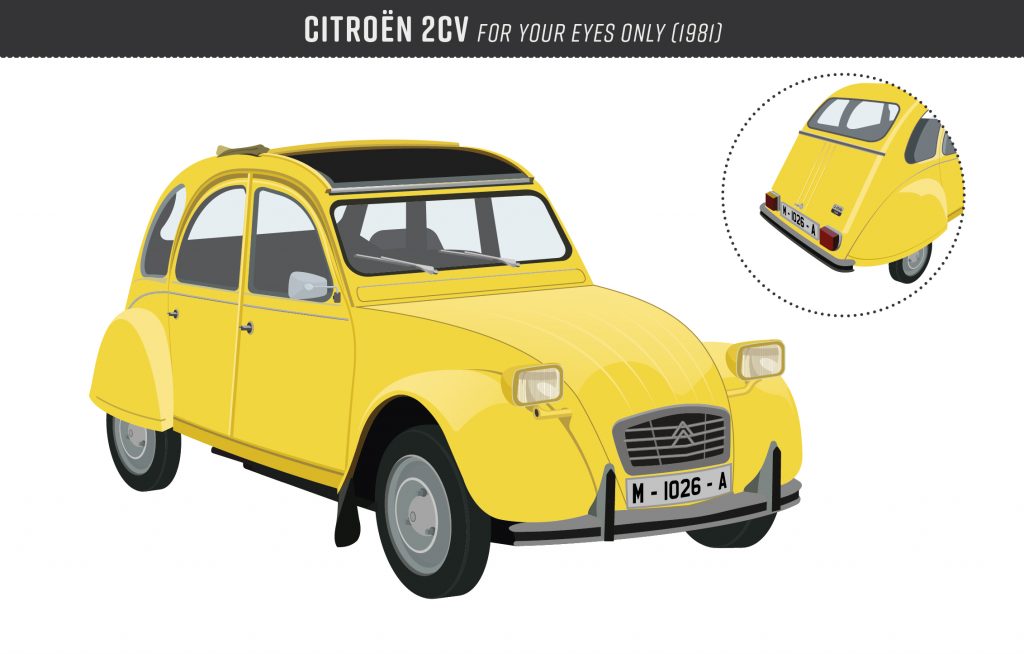 This gadgetless Bond car was of a different kind altogether; the 2CV took a royal battering in For Your Eyes Only, with James Bond using the car – along with Melina Havelock – for a downhill mountain chase. It gets rolled over and has to be righted, but the trashing of this car made it all the more famous, with Citroën releasing a special edition complete with bullet holes.

Appeared in: For Your Eyes Only

Who was Bond? Roger Moore

Highlight: Toppled off the road, Bond and his partner get some help thanks to community spirit, helping right the 2CV. Bond then nominates himself to drive with “You don’t mind if I drive, do you?”.

At Classic Car Windscreens, we provide windscreens for any vintage car. Our windscreen repair and replacement services ensure the look of your classic vehicle is complete, so it looks at its best even if you aren’t James Bond.

Talk to our friendly team about your vehicle and your requirements today and we’ll be happy to help.